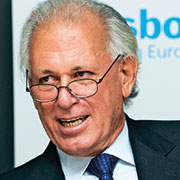 Alessandro Leipold (Sandro) has had an extensive career in international economics and finance, centered in banking and international organizations – notably the European Commission and the International Monetary Fund, where he was Acting Director of the European Department upon his departure at end-2008. In that capacity, he led the Fund’s work in Europe during the outbreak of the global financial crisis in 2007-08, and the Fund’s programs in Hungary, Ukraine, Latvia and Iceland. Sandro is currently Chief Economist at the Lisbon Council, a Brussels-based think tank, and a Senior Fellow at LUISS University School of European Political Economy in Rome. He has written widely, including as a columnist for Il Sole 24 Ore, and given numerous presentations on international financial issues. Over the last years, Sandro’s efforts have largely concentrated on bringing a Clubhouse to Washington DC, as a Board member of Capital Clubhouse.