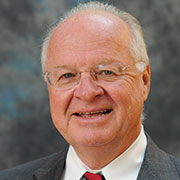 Tom recently retired from the position of Deputy Chancellor for Commonwealth Medicine at University of Massachusetts Medical School (UMMS).

He began his UMMS career in 1978—at what was then UMass Medical Center—as the associate hospital director for mental health affairs; his work in the department of psychiatry with then-department chair (and later, chancellor and dean) Aaron Lazare, MD, laid the groundwork for the medical school’s significant involvement in public sector psychiatry programs.

While at UMMS, Tom pioneered the development and continuation through today of The Program for Clubhouse Research, a widely recognized evidence-based research program that surveys member Clubhouses each year to document the success of Clubhouse rehabilitation programs everywhere in the world. This Clubhouse Profile Questionnaire and related findings has been included in SAMHSA’s Registry of Evidence-Based Programs and Practices.

Tom also oversaw strategic facilities planning in the era that led to the acquisition of a number of UMMS facilities, including the Shriver Center in Waltham, the Worcester Foundation in Shrewsbury, Century Drive and the South Street campus, as well as the construction of the Lazare Research Building. He also led the group that planned and executed the medical school’s façade modernization project, which is credited with preserving the main medical school and hospital building.

Tom also played a key role in the expansion of UMass Biologics in Mattapan and worked on the leadership team that created the framework for UMass Memorial Health Care.

His work has been acknowledged with honors such as the Manuel Carballo Governor's Award for Excellence in Public Service and a Commissioner’s Special Commendation for outstanding service, advocacy and dedication to the delivery of high-quality mental health care by the Massachusetts Department of Mental Health. He serves on the boards of trustees of Assumption College, the Genesis Club and Family Health Center.