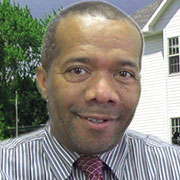 He completed a successful Transitional Employment Job. In 2013 he finished his Masters’ degree in Education. And in 2013 Steven started full time as President and CEO of a company that he founded called Manning Video Productions, LLC. He also serves on two other boards: The League for the Blind and Disabled and Windsong Pictures. Steven is also a stage and film actor, with 3 motion pictures to his credit. Production of a fourth film is set for the Summer of 2018.