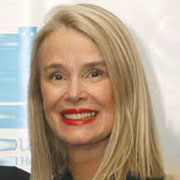 Lorna Hyde Graev, a long-time public relations executive, has been involved with the Clubhouse movement for many years. She is currently a Board member of Clubhouse International. In addition, she has served on the board of Fountain House since 2001, where she was Chair and Vice Chair for External Affairs. She became an advocate for mental illness as a result of her own experience with bipolar disorder. As part of her involvement with Fountain House, Lorna co-founded an annual symposium and luncheon, featuring a panel of two doctors and a lay person who has lived with the illness that is being addressed that year. The event has been a great success: it is attended by 600 people each year, and raised over $1 million last year.

Lorna has had an extensive and successful career in public relations, fashion and the arts working for Christian Dior, Jones Apparel Group, the Contemporary Arts Council of the Museum of Modern Art and Richard L. Feigen & Co. She has served on the Advisory Board of the Evelyn Lauder Breast Cancer Research Foundation since 2001 and in 2017 she co-founded a Play for Pink annual fundraiser benefiting the Foundation at the Millbrook Golf & Tennis Club in Millbrook, New York.