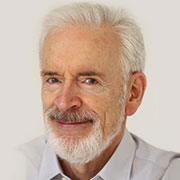 Mark Lewis Glickman has been involved in almost every aspect of the Clubhouse movement for almost 45 years.  After graduation from Queens College, Mark experienced severe and disabling depression and two psychiatric hospitalizations.  He was referred to Fountain House where he became a member in 1973.  After years of participation in the day program, transitional employment, and independent employment, Mark joined the staff of Fountain House and worked with the National Training Program.  In 1986, Mark earned a Masters degree in Broadcast Journalism from Boston University and worked as a reporter for a pubic television station in South Carolina.  After returning to New York, Mark pursued his passion for journalism as a free-lance spot news reporter and published photographs in the New York Times, The Daily News and the New York Post.  He rejoined the staff of Fountain House and was an integral part of the team led by Rudyard Propst that formulated the Clubhouse Standards.  In the1990’s, Mark made several documentaries, including a film about Fountain House entitled We Are Not Alone, which was widely disseminated in the Clubhouse community, and co-authored the book Fountain House:  Portraits of Lives Reclaimed from Mental Illness (Hazelden Press).  Over the years, Mark has written numerous articles and made many speeches around the world about the Clubhouse model.  In addition to his work on behalf of Clubhouse, as a result of managing the investments of his ailing father, Mark developed an interest and expertise in the financial markets and continues to work independently as an investor.  Mark served on the Board of Directors of Clubhouse International (and its predecessor International Center for Clubhouse Development) from its inception in 1994 until 2016 when he transitioned to Emeritus status.