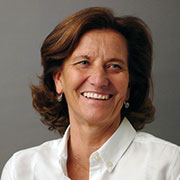 Beatrice Bergamasco was born in Italy, and is still based there today, but has lived in Zimbabwe, the U.S. and Argentina. She holds a Master's degree in International Business from the American University in Washington D.C.

Deeply affected when her older brother was diagnosed with mental illness in their teens, she was inspired to become an advocate for the rights of people who suffer from mental health illnesses.

Beatrice was a founding member of the Italian association Pogetto Itaco in Milan in 1988. Since then she has occupied the role either of President and Board Member in Milan, Florence, Rome and Palermo and provided support for other Clubhouses throughout Europe.  Today, there are 11 Italian associations working under the umbrella organization of Pogetto Itaco.

Beatrice continues to spread the word about the Clubhouse model and founded the first two Clubhouses in Argentina and one in Mexico.  She also introduced and disseminated the Family-to-Family courses by NAMI in Italy.

A keen environmentalist, she is president of a foundation in Uruguay, Amigos de las Lagunas Costeras (Friends of the Coastal Lagoons). With strong ties in Argentina she continues to serve as an Honorary Board member of the Ospedale Italiano (Italian Hospital) in Buenos Aires. Her daily work is to administrate her family's real estate interests.

She loves outdoor sports and travelling and spends time whenever she can with a daughter and a son living in the U.S. and Argentina respectively.

Beatrice is committed to changing how mental health is perceived today and to fight for the rights of people who suffer from it, their caregivers and families.